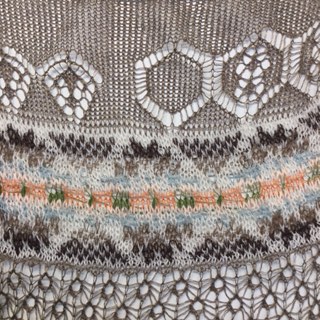 The final week of the first year of my part-time MA at NTU is drawing near and what have I learned?

More than that, what have I felt?

On a technical level, I have learned measurable things: how to use Digital CAD knit to a level where can design lace knit – maybe that’s the only measurable thing. (and maybe linking – but badly)

But from the perspective of just soaking in the atmosphere and feeling my way, I’ve taken leaps and bounds from that first day in Sept 2016.

I arrived at Uni only being able to hand knit now I can see a future in my knitting that is beyond what I thought possible or considered and that is to make knitted lace – it’s as simple as that but what goes into that making isn’t simple at all. I suppose that this year, I have been working from accidental results and prototypes built from flawed outcomes from the digital CAD and power knit, but that’s also not the result.  Flawed endings are not a result. There may be a broken piece of power knit in front of me but it has a heart and a soul and a back story and here lies the unmeasurable learning.

To look at a broken piece of knitting with vision and joy is or has been the task of my countless attempts at trying  to knit lace – perfection was never an aim (but only when it seemed so risk ridden). The birth of my broken power knit samples involved multiple journeys to Shetland, taking in the light and the landscape and language, looking at traditional hand-knitted fine Shetland shawls in the Shetland museums, spending hours figuring out how the lace patterns are made and translating that into digital CAD designs, graphing lace patterns out in knit language that I had to learn,  then digitally positioning them to make an altogether knitted piece that is aesthetically pleasing in a number of yarns (some of which have been brought to the machine by contacting sponsors – some from the yarn bin at Uni – none purchased) stretching, pulling, steaming the pieces to flatten dishcloth shapes with holes in – sometimes unwelcome holes which were caringly darned to save the piece. Some pieces involved designing a garment shape and positioning the tried and tested lace patterns within the boundaries of the ever moving edges or mirroring, chevroning and altering patterns.  Why, then, are there still holes and errors? If I love it and have developed it to a sort of visual simulated perfection – then why does it still have broken areas – ah, take-down, tension, bent needles, programming, yarn waxing, yarn breakage, doubling up, single thread, finding something suitable. And why, then, is it still a bit broken – never mind, I’ll embrace the broken bit by darning into it. What? Darning? Dutch darning, boro darning – regular sock darning – it’s all in there in this broken piece of knitting that we will call unique’ 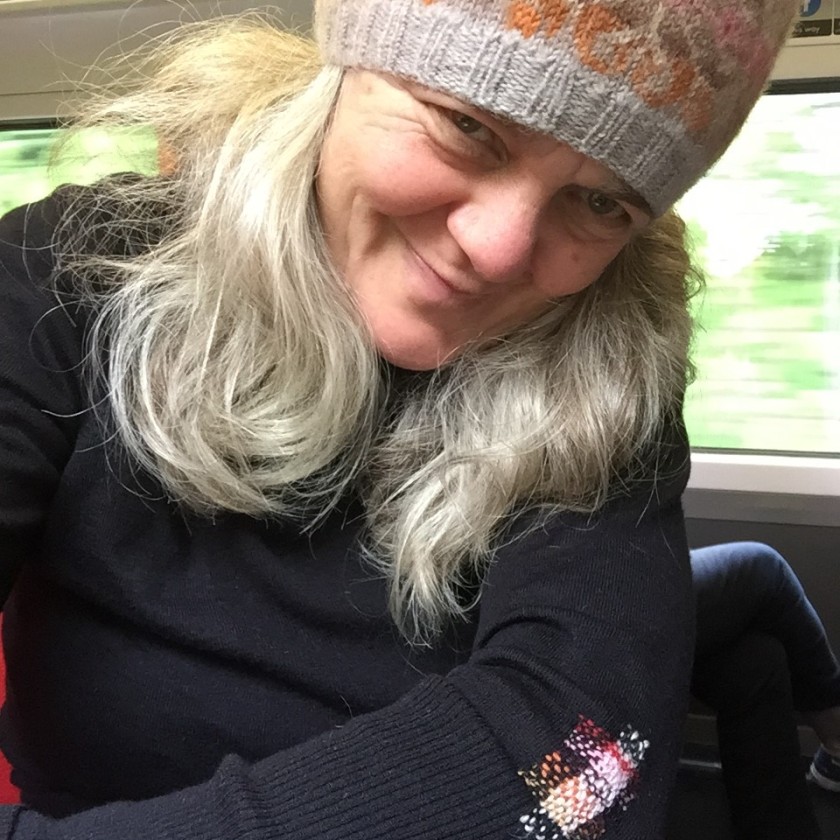 So, I look at the unique piece of knitting with joy and vision.

and, the latest samples are also intriguing  –  The gauge is too wide, the fairisle is like lace – nnoooo, it’s just like the drawn line.  It has a pencil line quality – that’s what it is. it’s quite beautiful in its looseness. The fairisle is like a loose pencil drawing. It’s not knitting at all – and I can see how it will look in a garment.

When I look over my shoulder, I am pulling a faint thread of invisible yarn from Jamieson & Smith in Lerwick, Shetland to here in Nottingham to attach it to a power knit machine that I never knew existed 10 months ago, and I can (at last)  see the journey that I have travelled.

I’m spending time learning CAD. I don’t find it so easy but I’m not giving up.  I’ve been a hand-knitter for about 35 years so I read knit in hand design and patterns and words.  CAD is another world to me. The Blue sample above is a machine knitted sample that the Shima power knit machine at Uni chewed up and released rather begrudgingly after another person’s work was left on the rollers.  The waste and cast on had a ladder and the pattern that I had designed from a hand knit idea inspired by Shetland lace, was not suitable in places, for transferring stitches on the Power knit machine.

What came out of the Shima, was something rather beautiful.  Something ragged and torn with a raw cast off edge.

I used two double ended 2.5mm needles to pick up the cast off and cast it off safely and then I worked into the ripped part of the sample without plan or forethought.

The hand-knitted section in this machine knitted sample is knitted using very fine metallic and wool yarn in a lace edge pattern which mirrored the diamond that had been ripped away.

The result is raw, it’s rough, it’s unusable but I like it. It is not visually polite.   I like the dirty blue colour of the sample and the bronze metallic yarn used to patch it.

What I am interested in is the palimpsest, the traces, the layers and stories:

The traces on the wall of the wallpaper / paint/ borders once layered over each other in a derelict house, exposed to the elements.

The 300 year old graffiti written into the walls of a castle.

The impression of lace on the opposite page in a sample book, after it has been closed for years.

A tear in a shirt.

The darn on an elbow.

The palimpsest of layers of words written in an old book.

I’m looking to express this in darning into the errors, holes, tears, rips in machine knitted lace to make something that both tells a story and can be beautiful. 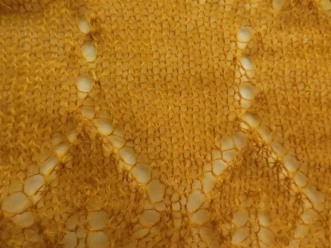