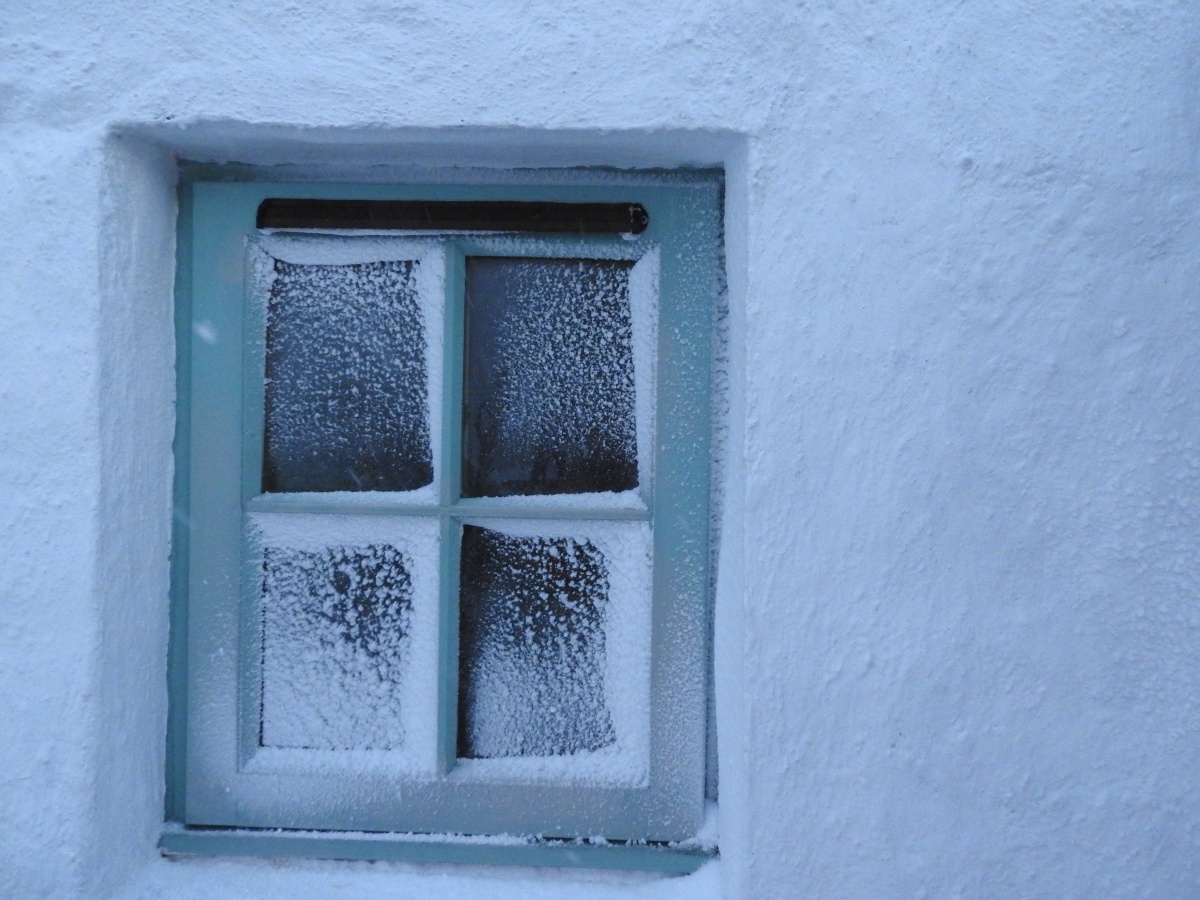 I have lost all sense of how I feel about this new land of mine in which I inhabit. The night of gales so harsh brought snow blizzards in 53mph winds. It was not a surprise to me but still I was not ready. Every experience is still in my first year. The long, dark, lonely, isolated winter had, I thought, passed but the night of harsh weather brought it all back and I wonder what is my purpose to being here.   I knew at 6pm yesterday that the night hours would be harsh and I began to compare the weather here with the photos of Sheffield in blossom and there is no comparison, no point in looking south because either I embrace the weather here, or it will beat me. This is not an island for blossoms.

I looked out at the sheltering boats in my sight line, knowing they were there because of the roaring North Westerly winds.  I wondered how these men survive out at sea and the oil rig guys and then the poor sheep ready to lamb.  Before daylight vanished yesterday, before the light was anywhere near dark, the snow had been blown into a low sea of ripples coating the road as if a fine sanded beach but the snow was frozen into solid ice.  Ice ripples. It is both magnificent and daunting to see this elemental response to winds, snows, freezing temperatures and exposure to the elements through no shelter. I gathered wood for the fire and shut the door.

In the morning, in the bedroom facing the sea with a chimney full of swirling, angry winds, I have lost all sense of what I feel. Remnants of the long winter are still within me, in my bones and memory. The Easter blizzards have brought back a reminder of an isolated feeling.

At 5am, the sun will not show a hint of light, whereas during the week running up to this storm, the sunlight glowed at the same time. I imagined the sun wrestling in the sky with winds, snows and clouds so ferocious that all it could do was wait for a gap, wait for the elements to die down so it might shine.   The forecast gives no respite for 2 days.  It feels as though we are plunged back in to winter except that we have more day light hours. It is lighter.  The cats want to go out but Alfie is terrified of these winds but he can wait no longer.   I stand at the door shaking to my bones whilst he goes for a pee under the poor Christmas tree.  I think it is his doing that has made the tree lose needles. Tiggy thinks twice about the whole idea of going out but finally has to. They shoot back in the  house, brushing my legs with their bodies.

I  leave the outside porch light on to let the boats know that we are here on the  land, whilst remembering the story I was told last week of  the winter storm where a ship hit the rocks at the south end of Levenwick. Eleven men scrambled off the sinking ship on to the rocks, in to the sea and up the cliff.  It was pitch dark but in the  darkness, they saw a light in a small house which they made towards and were taken in.  If they had not seen the light, they would have perished outside, wet, in a freezing storm at night.  The rest of the crew were lost at sea and only the Captain and his sea chest were washed ashore.   Years later, the cabin boy, who survived, returned, as a skipper of his own boat, to the house where they were taken in.  He sat upon the cliff and cried at his memory – then he sailed the boat that he was skippering to  the place of the wreck, stayed a moment then sailed on.   This is a land of survival.  The cats and I are adjusting, learning, swimming, treading water as we only can.  City bodies on an island.

It is way past the time of sunrise – the sky is still midnight blue, the sea as if ink. What will the day bring – I will have to go and dig out the coal, bring in the peats, light the fire and be grateful for this opportunity to live in this environment but even so, I am aware that this is the harshest of gales that the cats and I have been here for and feel that instead of looking at the harsh extremes, I begin to  actually see the extreme beauty where nothing is missed and  I am aware of everything.

I used to face the sea. But now I see the colours of a city where I’m connected to friends who nip round for breakfast, where people who know me have stopped at a junction to shout, ‘hi’, out of their window, where I see a fluidly moving group of women at the gym most mornings and we know each other’s characters and where I can anonymously drop in on any cultural event possible or make friends or join in or just leave and no one minds. This city may not be pretty, in fact, the centre is anything but, but my heart lies in a culturally open city and I still chase colours, all the same. #sheffield #southyorkshire #citylife #cutyourcloth #sunset #colourchasing #livelifetothefullest wherever you are
Tests at night, in the half light. Would I rather be doing something else? Sometimes. But sometimes I do. I’m still gathering energy from all the moves. Colour work knitting helps.
One of my most favourite things in my Shetland life was the hand printed wallpaper I put up in my guest room. Not only because it was unique, hand printed generational original #peggyangus but because my wonderful, creative, beautiful friend Emma, printed it for me. And taught me the story of her grandmother Peggy Angus. The wallpapers was a gesture of friendship and kindness grown out of conversations, funday Fridays spent out on beaches looking for Buckies and on islands, on beaches making shapes in the sand, and in lay-bys at sunrises. Friendships are made over time and through times. Once, I was in a pretty bad place and went to sleep in the floor in a corner of her office above the shop. These exchanges cannot be bought they’re entrusted. When I was leaving Shetland, the car was piled to the roof with two cats buried amongst the possessions. I left and gave away so much to leave but I brought scraps of left over wallpaper. When I opened the car, E had planted another roll of the hand printed paper amongst my stuff. Until now, I haven’t had the head space to really think about it. But I am finally finding a wall to hang the damask paper. Do much more than a wallpaper, or paint, or colour chosen from the inside of a drawer. So much more than a Shetland memory. My friend made me this paper. And it has followed me to a minuscule cardboard flat in Sheffield and I can’t take my eyes off it m, once again.
Sometimes, I just stare at the colours of the walls.
What did you do today? I’d love to know.
As well as knitting stranded colour work and writing, I forage flowers for drying to make wreathes for friends and Patti. Today I nipped into the brilliant @moonko____ on division st and had a great chat about flowers, the scent, drying and making up into something beautiful to keep. On the way home, in a student yard, I spotted a load of honesty that had gone over and was very disheveled so I picked some. I’ve wanted to make an honesty wreathe for years and now I know where to get the crop from this year.